Put up a Parking Lot

Another week has flown by and much of it has been spent immersed in headphones, recording tunes!

Monday morning gave me the opportunity to explore one of the local neighbourhoods: Inglewood. I feel like Inglewood is Calgary's equivalent to Manchester's Northern Quarter, with a hint of London's trendy Shoreditch. On the surface, Inglewood didn't strike me as somewhere I could explore for hours on end, but there were so many hidden gems to discover that I'm pretty sure I'll be heading back again before I leave! I think one of my favourite finds was a second hand book store, which was hidden in the basement of an old building, behind doors with bars and a shabby shop sign outside. It was like a treasure trove inside! I loved that they had world maps plastered all over the walls and a pretty epic, retro CD collection, as well as books old and new on just about every subject imaginable. I also tasted some beautiful coffee in Inglewood, and explored a colourful shop selling beautifully woven rugs and cushions. After an amble through Inglewood, it was back to the flat for some gym time and then the start of the recording process with Justine (with a couple of kitchen jams thrown in, of course!) We also made it out to Mikey's jam night again, which proved to be an entertaining night of varying levels of jamming success - you live and learn, eh!?

Tuesday was a day for admin, sweating in the gym (it's a hate/love thing that Gym and I have got going on..!) and a top-notch evening of tasty tacos (move over Nigella, JV is in town) and the jammiest of jams in the parking lot underneath the flat. I met the super cool Ben Longman, who is a fellow Brit and a singer/songwriter who moved to Canada a few years ago. It was great to meet Ben and to chat about his new Canadian/musician lifestyle here and we were soon joined by Brady, which prompted a fresh rendition of the Talking Heads tune: This Must Be The Place. We took the jam down into the parking lot, which made for some seriously boomy, Bach-worthy acoustics! Willie filmed the whole shebang on his GoPro, so we're excited to see & hear the results! So great to make music and hang out with such lovely people. 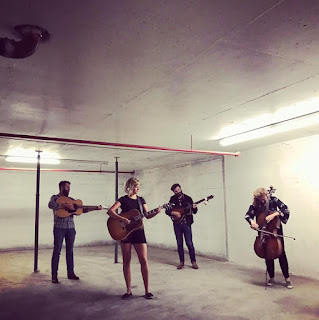 Wednesday rapidly turned into an epic one. Justine and I spent some more time on the Songs for Jo recording in the morning, and had various experiments with tech and set-up, eventually deciding on a simple interface/logic situation. We had a proper little homemade studio going on by the end of the day! In the afternoon, we headed to one of the coolest studios I think I'll ever see! This was set up in a garage/big garden shed, belonging to Curtis who I'd met at the Canmore Folk Festival. Curtis is also a musician, and has created an amazing space called The Speakeasy Garage, which houses private house concerts and rents itself out as a studio space for musicians too. This man has some serious style - it was pretty magical inside, which makes for the perfect environment to get creative. Justine took me along to meet the rest of her band, The Griffins, who write and record their own soul/country music, and on Wednesday they were all set up to record an EP. Little did they know that a few beers, a taco salad, 12 hours and 8 tracks later, they would have recorded almost an entire album! It was really cool to be there to hear and see their recording process and to chill out to some of their tunes - I loved their style and vibe. During the break I whacked out some cello and we recorded a cover of Dolly Parton's 9-5, which was a bit too much fun, and Justine and I recorded a couple of other tunes whilst we were there. Curtis' space has completely inspired me and has also highlighted to me just how important certain aspects of the recording environment are. I hope to go back one day.

Wednesday's recording session soon turned into Thursday, as we finished at about 2am, so we had a slightly slower start on Thurs morning. We still had to be up and at it though, as JV and I had a gig right in the centre of Calgary on Stephen Ave. This was a lunchtime shindig and was set on a trailer, which I discovered is set up almost all year-round for lunchtime gigs/live music - a great idea! Justine and I had about 50 mins of music to play to a mixture of tourists, passing visitors and city workers on their lunch breaks. I really enjoyed this gig - it was great to be outside and right in the midst of the city bustle - very different from Canmore, but pretty cool all the same!

Friday was chilled (this is now reading a bit like a Craig David song... ) with a walk by the river and a new organic food market discovery for me (bloomin' beautiful blueberries!)
Some cello happened, as did some admin (there's always admin!) and then JV and I had our full evening gig at Gravity Café back in Inglewood. We had such a blast at this gig, with 2x40 minute sets filled with a mixture of our favourite covers and lots of originals. I also whacked out some Julie-o on the cello and we took a couple of requests from the very friendly, banterous audience! The evening had a very relaxed, friendly, happy vibe and I met some more wonderful people afterwards.

Saturday was a rare opportunity for me to sit and write/experiment with/record some more of my own music, which was super fun. I also went for a walk into the city centre to have a mooch around, and it wasn't long before I was hopelessly lost amoungst the huge office buildings, which I quickly realised all look pretty similar (I'm really not a city gal!) Luckily, I soon ambled my way back to the river, where I found a beautiful riverside spot to sit and ponder, relax and dip my toes. I love the contrast in this city... one minute you're lost in a concrete jungle and the next you're paddling amoungst trees, squirrels and hares! ALL of the variety.

Sunday and Monday have been spent in the headphones, creating more tracks for the CD, which is pretty much there now. We have a healthy mix of covers and originals, all themed with JV's niece and sister in mind. I find recording to be such a challenge and I'm looking forward to getting a lot better at it, the more I do it! I love live performance, improvisation and creating music on the spot that might not be heard/played in the same way afterwards. I find that aspect of cello playing freeing and refreshing, so it's been a challenge to have to make some decisions before I play, and to be happy knowing that these decisions are set in stone once recorded. It's such a different skill/art to live performing, and is something I want to improve at, for sure!

On an unrelated, foodie note: we went for some delicious sushi last night in Kensington, which is another trendy district of town, after a cycle ride to the evening Church service. The river here in the evening is something else - so peaceful, calm and totally beautiful. My two flat tyres slightly distracted from the feeling of calm and serenity, though... they're all pumped up and ready to rock and roll again after some TLC today, and I'm totally loving my rediscovery of exercise. These glutes were made for cycling...
For my final week I'll be going it alone, as Justine will fly out to take care of her super cute niece, so I have a trip to Banff planned, as well as some city adventures, more music making, plenty of river time, oodles of cello playing and hopefully a trip up to the top of the Calgary Tower!

Missing loved ones, but feeling very lucky to be soaking up this exciting environment.

P.s. Another word from the JV/PV book of mis-translation: Dungarees. Here, they're overalls!
Posted by Unknown at 22:34