A Bus to Banff and a Plate of Poutine

I'm almost at the end of my Canadian adventure here in Calgary and I couldn't feel more refreshed, inspired and energised ahead of my return home. I feel lucky to have spent this week exploring, composing, cello-playing and taking some time out to enjoy the little things - it has been a bit like a much-needed retreat!

I enjoyed a fantastically fun jam with Nancy on Tuesday night - it was great to create together. We were working on a new song of Nancy's; figuring out the structure, exploring some different chords etc. I love being privy to the songwriting process, so it was great fun and Nancy has a corker of a song!

On Wednesday I decided to take a long walk and explore the super hip district of Kensington, where I found some lovely independent shops selling art supplies, vintage clothes, handmade gifts, second-hand books and retro records - all the best things! It was soon approaching lunchtime and like a shining beacon, 'The Big Cheese Poutinerie' revealed itself to me on the other side of the road 😜
Earlier in my trip, Justine had told me about the wonders of poutine and how it is one of those "must experience" things whilst I'm here in Calgary. Never one to turn down cheese, I definitely didn't have trouble deciding where to go for lunch! Poutine, in its most traditional form, is chi,,ps/cooked potatoes covered in gravy and cheese curds. I remember discovering the wonders of cheesy chips back in my first year of college (probably at about 3am in Babylon on Oxford Road!) and I've always enjoyed IKEA's gravy chips, so poutine was sure to be a winner! It was pretty delish, if a little stodgy by the time I'd reached halfway - but totally worth trying! Whilst we're on food (rare that we're not!), I have to mention the biggest, most impressively varied selection of marshmallows that were on offer at the supermarket in Kensington - WOW! There were tiny ones, pink ones, blue ones, HUGE ones, made-for-cooking ones, mixed coloured ones, stripy ones, even HUGER (yes, not a word) ones... I almost took a picture, the selection was that impressive, but I was already acutely aware that I was exuding too much over-excitement at being a Brit in a Canadian supermarket and didn't want to completely give in to the stereotype by whacking out my polaroid! Foreign supermarkets are some of my favourite places to explore - I'm definitely my Father's daughter in that respect, eh Dad!?
ANYWAY, Wednesday was super hot - I think it reached a sweltering 31 degrees, so I took a slow amble back to the flat for an evening of yoga and cello playing/composing.

Thursday was adventure day! I decided to take a trip back to my happy place - beautiful Banff. I got up at 5am to get to the Greyhound station in time (commitment!), where an exceptionally chirpy Greyhound guard greeted us all with high-fives and one-liners. I was loving this guy's style, but I think his quick wit and wide smile were a bit much for some of the passengers at this time in the morning..! The journey to Banff was almost more beautiful than the place itself - totally stunning when we were approaching the mountains. We passed through Canmore first, which looked different without the hustle and bustle of festival tents, musicians galore and the hundreds of volunteers at Folk Fest. I really love Canmore, as it feels quite untouched compared to the touristy main streets of Banff.

I arrived in Banff at about 9am and decided to go straight to my happy place! There is a bridge over the Bow River, which I found on my residency last year, and the views are magical. It felt very different to be there in the heat of Summer this time: the river was flowing fast and the water was an incredible aqua/teal colour and lined with towering green pine trees. 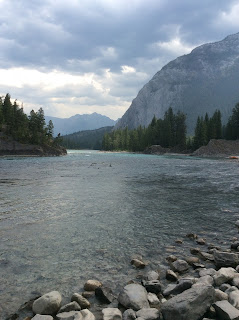 The last time I'd seen it, the river was frozen-over and just beginning to trickle back to life, and the mountains were knee-deep in snow! I spotted a sign for the Bow Falls, so followed the trail for a while to find some awesome rapids/falls, sloping down into another stunning spot. The natural sounds of this place are amazing. I spent a while just drinking it all in before heading up towards the Banff Centre for a visit. The place had such a different feel about it because of the change in season... but luckily, little else had changed: there was still an elk just casually chilling out by the practise huts; it was as if he'd never left! I found my old Hut No.6, which was like visiting an old and loyal friend (!) and then popped into the music building to see what was happening. I heard some really cool sounds wafting out of the practise rooms - there was a jazz residency happening at the time. I love the buzzing atmosphere of the Banff Centre - it feels like there are always exciting creations happening behind every door and such interesting people wandering the corridors. I even smelt the tempting aroma of a Vistas lunch... oh so good! I reluctantly tore myself away and spent the afternoon pootling round the shops, enjoying lunch back down by the river, before embarking on a hilariously failed attempt at a moose selfie with a polaroid camera... a funny/embarrassing tale! On the bus back, I enjoyed a childish chuckle after spotting the sign for Lake Minnewanka (anyone else find that funny!?) and marvelled at the incredible Rocky Mountains for the last time.

Friday was a day for working, yoga, recording my own music and chilling and Saturday saw a trip up to the top of the Calgary Tower! I went early to beat the crowds (nailed it!) and it was really cool to see the city from up there. It used to be the tallest building in the city, but as is often the case, a few years later someone else decided to build a taller and slightly uglier one just a few streets away! I really gained a sense of the layout of the city and it struck me how spread out and spacious everything is here. It looks very different to your average UK city where everything has been crammed in and squished together. There was a beautiful view of the distant Rockies and a cool ariel view of the Bow river too. I sheepishly edged over to the viewing platform with the clear glass floor, for a queasy glance down at the road beneath... had to be done. After some more exploring in town, I came home to try my hand at making some Dutch/Canadian pancakes, which were so epic that I was done eating for rest the day! Phew.

On Sunday, I spontaneously spent the morning playing Bach! It was something I hadn't had the chance to do for a long while and it was a beautiful feeling that had me buzzing for the rest of the day. There is always something new to hear and to experiment with - I don't think I'll ever tire of just sitting and meandering my way through my favourite Suites. I also rediscovered some of my old frenemies: double-stop scales (sorry neighbours!) and generally gave my cello hands a good workout. After some more recording, I decided to get some fresh air to catch the last al fresco performance of As You Like It, which is part of the awesome Shakespeare by the Bow series here in Calgary. I luuuurve outdoor theatre/outdoor art in general, so this was a real treat. It was performed on Prince's Island Park, just across the river, and people gathered with friends and picnics for a sunset performance - it was fantastic! I walked home to the view of a beautiful sunset over the river and a magical moon from the balcony.

I'm excited to have my pal JV back for some final kitchen jams and then our last gig at Mikey's tomorrow night - can't quite believe I only have 2 sleeps left here.

P.S. Some of the footbridges in Calgary WOBBLE! It properly shook me up (pardon the pun) the first time I experienced it... thought I was having a 'funny turn' or something! It sure makes for a pretty turbulent Sunday evening stroll!