Today I'm blogging from the Banff branch of Starbucks... a bit like visiting an old friend! When Ella and I embarked on our American backpacking adventure a few years ago, we could always rely on the free wifi in the Starbucks that would inevitably sit in the heart of every town... sad but true! On the walk down to town (down to downtown!) today I discovered a breathtaking viewpoint from a bridge (will try to convey the gorgeousness in pictures later..!) just before town where, as well as the snow-topped mountains, I could see the frozen Bow River beginning to defrost and come back to life.  It sounds amazing! The weather here has apparently been strangely warm this month, so much of the snow is disappearing now... and I have several pairs of unworn thermals, which is a sure sign that we have yet to experience below about -7 ish (TMI?)

On Sunday morning it was time for more farewells, but also an excuse for a leisurely breakfast in Maclab (my first pancakes of this visit... too good!) The sun was absolutely stunning on this morning, which looked incredible over the mountains surrounding the centre. I also spent some productive hours in my hut on Sunday, and finished recording and mastering a track - my first track using the PROPER equipment..! Phew! In the afternoon, I found my most favourite sitting spot yet, which boasts pretty much panoramic mountain views and absolute silence (almost!), which is quite something!

A little aside - I have just heard someone order an "extra hot flat white" - ouch! (and why!?) On the plus side, there is some seriously smooth jazz wafting through these speakers...

At dinner on Sunday, I met the Swedish cellist who played in a beautiful performance called "Re-inventing Bach", in which he played excerpts of the cello suites, whilst an incredible Canadian dancer performed alongside him - I don't think I wrote about it when it happened, but it was really different, creative and emotive. It was interesting to chat to him - also it turns out he is another cellist who has spent time studying at RNCM! He then came along and played with a few of us at Kate's Baroque Party! This was a lovely, informal few hours of reading through all sorts of music in Katelyn's studio.. but, to my relief, as soon as things began to turn a little more serious, we all decided it would be better to go for a drink or two! Phew! ('phew' count = 2)

Monday was our last Roundtable in Bentley... it was really sad to be sitting in a drastically smaller circle than in previous weeks! We had to remove chairs :( There are no new musicians in residence this week, but there are two new faculty members, who are both singer/songwriters from America. There are fewer performances and general events happening this week, which has worked out fairly well for me, as it is meaning many more hours of hut time to work on some music. But I'm realising even more how much I was enjoying seeing and hearing everyone else's projects, and how much this was keeping me motivated and extra-inspired. After the roundtable meeting, I visited Nancy's hut for some collaboration on a few of her songs, which are super cool and full of personality! We're performing these in The Club on Thursday night. I then returned to my new favourite place - the yoga studio - for some much needed stretching. Something I hadn't quite envisioned was the shocking announcement: "Today we will work on our headstands".. oh! Needless to say, my headstand consisted of resting my head on the mat and imagining with the best of my imaginative powers the next part, i.e. legs in the air... I probably looked like I was having a bit of a meltdown.. in fact it was quite relaxing! Pretend headstands aside, the class was great, and with no Justin Bieber interruptions and just Bon Iver on the speakers, it was very therapeutic. I then began a new track in the afternoon, which I have been working on today as well.

Yesterday evening, Manuel and Dory hosted 'Wrong Note Night', which was the biggest hoot. Actually quite literally, as we ended up singing Bach Chorales and Monteverdi madrigals! I whacked out my beefiest tenor notes, and four of us girls even considered marketing ourselves as "The Madri-gals"... yeah! The pianists did some really lovely Mozart, and Cathy and Dory joined for Shepherd on the Rock, which was simply too good for wrong note night! Ernesto even showed off his best nose-recorder playing... impressive stuff, and we tried a recorder/cello duo. We were jamming until the early hours, so this morning was a slow start, but after a morning Earl Grey and Lavender tea and chats with Alex, order was soon restored..!

Here are some pics to keep you in the loop.
Hope everyone's having a flipping fantastic (punny) pancake evening back home! 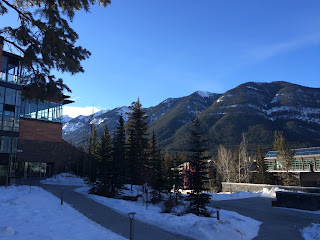 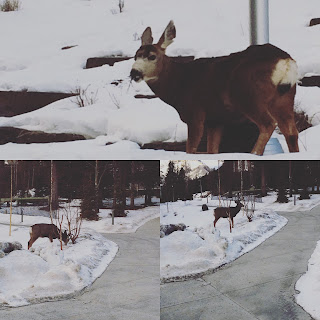 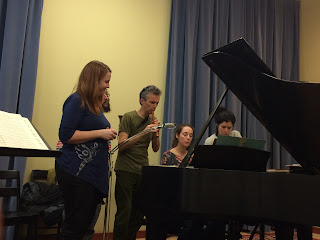 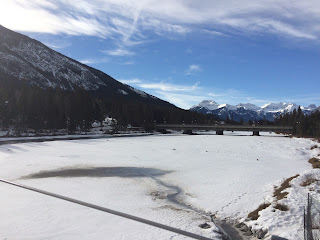